Northern Cree is a nine-time GRAMMY nominated powwow and round dance group from Treaty Six territory with 50 albums to their credit. The group was formed in 1982 by Charles Wood Jr., Earl Wood, Randy Wood, and Steve Wood.

Since 1999, Northern Cree has earned a total of 44 nominations and 18 awards for their music. 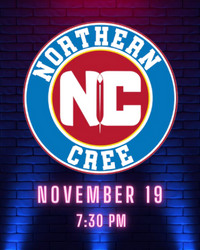