Kevin started his comedy career right out of high school in Banff, Alberta as he went on to win Edmonton’s Funniest New Comic weeks after graduation. Since then he has become a crowd-pleasing force to be reckoned with and has brought laughter across the country with his friendly, relatable style of comedy.

Kevin has performed on a CBC TV gala at the prestigious “Just For Laughs” festival in Montreal. Some other credits include the Comedy Network’s “Best of Just For Laughs” and “The Comedy Stampede”, as well as CBC radio’s “Madly Off in All Directions”, the “Edmonton Comedy Festival” and opening for Bob Saget and acclaimed musician Jeff Beck

You may also recognize Kevin from his hosting duties on Global TV’s “Inside Entertainment”, Sun Network’s “The DVD Show”, TV Tropolis’ “Where are They Now” and Shaw TV’s “Movie Reviews with Kevin Stobo”. He has had the pleasure to interview many movie stars, including Eddie Murphy, Adam Sandler, Ben Affleck, Jake Gyllenhaal and more. This consistently impressive comedian can currently be seen on Shaw TV’s “Golf Tips” as well has headlining Yuk Yuk’s comedy clubs, fundraisers and major corporate functions across North America.

Brad Semotiuk started comedy at 17 and now he’s 20(ish)! Brad won best of the fest at the Cleveland Comedy Festival, then toured Canada, and his stand up featured on CBC radio. Brad’s comedy is all real except one joke, he thinks you’ll like it. 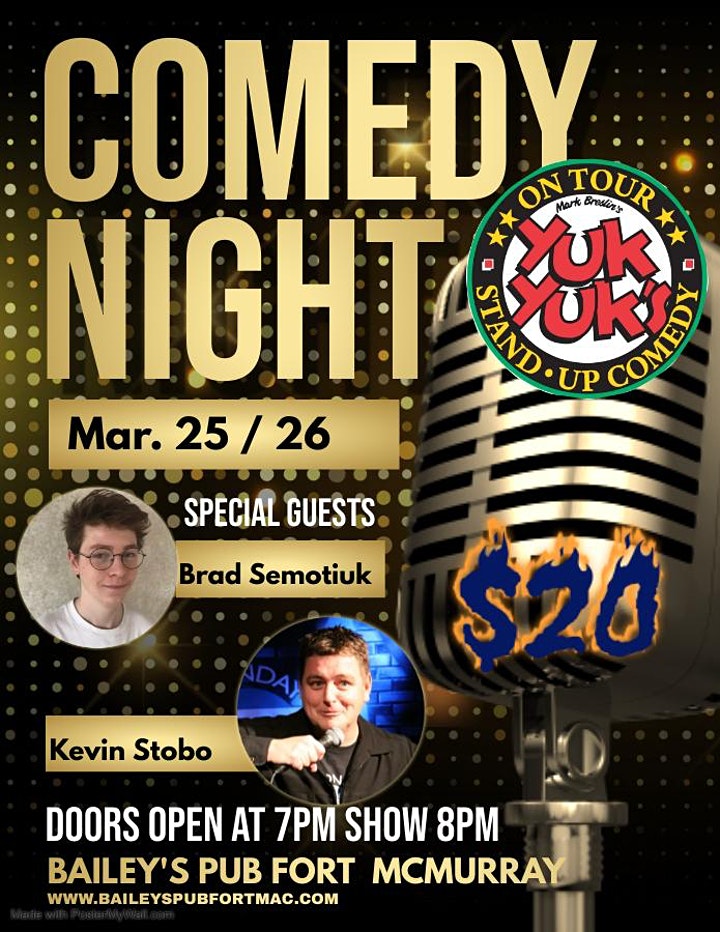